This is my contribution to Novel Food, a quarterly literary/culinary event hosted by Simone from Briciole.  We prepare a dish of our choosing that has a connection to a published literary work, and then we publish a post about it. Show the food, talk about what we have read. Simple as that. Well, I went outside of my comfort zone this time. No, not where the reading was concerned. I read Michael Ondaatje’s beautiful novel “The Cat’s Table,” a subtly powerful work conveyed in language that reached into the core of me, there to stay.


The author, made famous when he published “The English Patient,” is a native of Sri Lanka. So I thought I would try to cook a few dishes of Sri Lankan origin. Sorry to say, I had never before tasted nor cooked Sri Lankan. I went on a culinary adventure, one outside my comfort zone, and I am glad I did. I learned quite a bit about southern Indian cooking ingredients and cuisine. 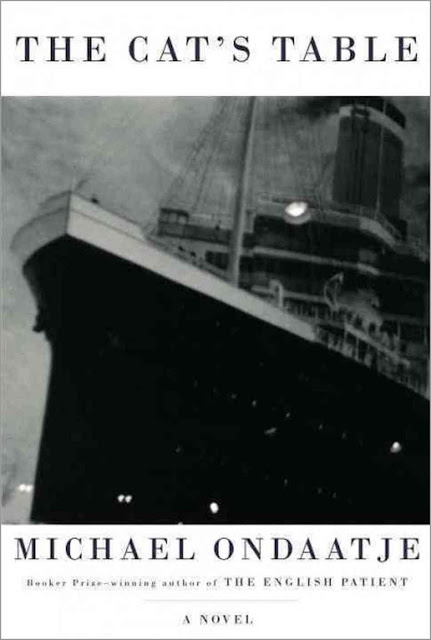 “The Cat’s Table” is about an 11-year-old boy, “green as he could be about the world,” who takes an indelible sea voyage in the early 1950s.  If the captain's table is the sought after place to sit on a sea voyage, then Ondaatje's cat's table is just the opposite: one of the least privileged dining assignments aboard the cruise ship Oronsay. The table is populated by an assortment of eccentric characters, and the invisibility that the cat's table bestows upon them allows them to behave more or less as they wish. The ship is sailing from Colombo, Sri Lanka, to England, a twenty-one day journey by way of the Suez Canal. Among the nine passengers at the cat's table sit three dissimilar boys sailing toward a reunion with parents they have not seen in years.  The young "Mynah" or Michael, is the narrator, Cassius, is a seemingly tough guy, and Ramadhin, is a frail and thoughtful type. The three become fast friends and join together to form a feral group that becomes the terror of the ship. They seem to be everywhere; they can be found having breakfast in a lifeboat or wandering around the furnace rooms. Somehow they know everything that goes on in the ship, and they slip in and out of adventures and dangerous situations. They snoop, they eavesdrop, and whatever they cannot understand due to lack of maturity, they store in their imagination and allow it to come to fruition there. What they see and learn on the Oronsay shapes their adult lives. The Cat's table is a novel of painful journeys and passages: Away from childhood into an adult world, and away from home into a strange country. Highly recommended!
I made three dishes to celebrate this wonderful novel, and they are as follows:

And a Tropical Fruit Salad!

All these recipes appear in separate posts. Just follow the links!