COOK THE BOOKS: THE SHAPE OF WATER


We’re going to Cook the Books again, and this time the vehicle we are using is Andrea Camilleri’s novel “The Shape of Water.”  After reading the novel we are making something to eat. Something delicious.  Something inspired by the book. In my case, I’m choosing to make pasta puttanesca with shrimp! I know, I know, the novel is set in Sicily, and pasta puttanesca is a dish created in Naples. Nevermind. Have you read this book? There are so many ladies of the evening living in its pages that it would be a shame not to honour them with the very popular pasta puttanesca, a truly delicious dish that is purportedly named after these hardworking women.


The fictionalized Sicilian town of Vigata is the setting for Camilleri’s novel “The Shape of Water.” The town comes complete with a “pasture,” which is the name for the al fresco red light district of Vigata. A dead body is discovered in the pasture by local trash collectors, and that sets in motion the action of the novel. That pasture is by no means a pastoral place! No sheep graze there. By the way, did you know that sheep herding is the second oldest profession in the world?

I made this version of pasta puttanesca with linguine, which I mixed in a briny tomato sauce that was flavoured with anchovies, capers and olives. I also added shrimp, which is not traditional, but I wanted to combine the briny taste of the sauce with seafood, a combination which can serve as a reminder of the beautiful seas which surround the achingly beautiful island of Sicily. While dinner was being prepared, I snacked on a mouthful of some crunchy càlia e simenza that I had made the day before. 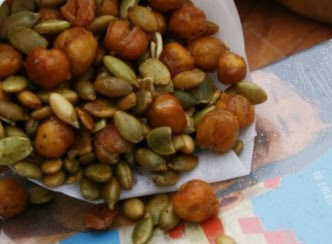 Càlia e simenza: lovingly described by the author, here is how our hero, Inspector Montalbano, enjoys this snack:

“taking the stroll he customarily allowed himself …  along the eastern jetty, out to the lighthouse.  Before he set out however, he always stopped at Anselmo Greco’s shop, a hovel that clashed with the clothing boutiques and shiny, mirrored cafés along the corso…  Greco also sold càlia e simenza, a mixture of roasted chickpeas and salted pumpkin seeds.  Montalbano would buy a paper cone full of these and then head out.”

I myself have eaten lots of  càlia e simenza, and it's a wonderful way to pass the time especially when taking a slow, scenic stroll.  Eat some chickpeas, crunch on some roasted pumpkin seeds, look at the scenery, contemplate your navel ... heaven! To make this snack, just open up a can of chickpeas, rinse and dry them really well and place them on a baking pan lined with parchment paper. Sprinkle some olive oil and salt over, add whatever other spices you really love, then bake in a 375  F oven for at least 30 minutes, or until they are crunchy. Roast the pumpkin seeds separately, mix with the chickpeas, and you're in business! Truthfully though, there is no way to make the perfect càlia e simenza at home. The real version is roasted and dried in an industrial setting, and it's something one buys from the street vendor or the corner shop. I spent many happy childhood summers snacking on bags of càlia e simenza. The Greeks (of which I am one) and the Sicilians have many things in common. Shared foods and recipes are one commonality. I was thrilled to read about inspector Montalbano's habit of eating càlia e simenza; it brought back memories.

Camilleri’s "The Shape of Water..." Following are some of my impressions of the novel, but first I include a type of prologue:

Once upon a time, there was a little boy who wanted a pony for Christmas. He started asking for it around September and didn’t stop asking ‘till Christmas Eve. That boy wanted a pony! Early on Christmas day he woke up, got dressed in a hurry, no breakfast, and he ran to the barn. He was sure there would be a pony waiting for him. However, all he saw was a large pile of manure. His father went to the barn and found the boy shovelling the manure. “What are you doing, son?” the father asked. “Looking for my pony,” said the boy. “With all this manure, there has to be a pony in here somewhere!”


Just like the boy in the anecdote, I did quite a bit of shovelling as I tried to find the pony in Andrea Camilleri’s novel “The Shape of Water.” Throughout the pages of the book, I met pimps, prostitutes, drug addicts, hoodlums, and corrupt politicians. I heard more than enough base and obscene language, and I failed to laugh at numerous crude jokes. I found out that the novel included inferences to incest, one of the most reprehensible types of human behaviour. As I shovelled along, guess what happened? My pony appeared!  It arrived on the scene in the persona of the dauntless Sicilian police inspector Salvo Montalbano, who ploughed through layers of corruption in order to solve the murder of a politically and socially prominent man who… died from natural causes.

The action of the novel unfolds in Sicily, unrecognizable in Camilleri’s rendering. The scenery is mostly limited to trash-strewn vistas and dilapidated buildings, and there is a meagre supply of likeable people.  Montalbano is described as a man in love with his native island, but there’s not much that's described to love here. Except for the food. When the inspector takes a break from police work, he usually finds something very interesting to eat, and what he has to eat always gets a favourable description. 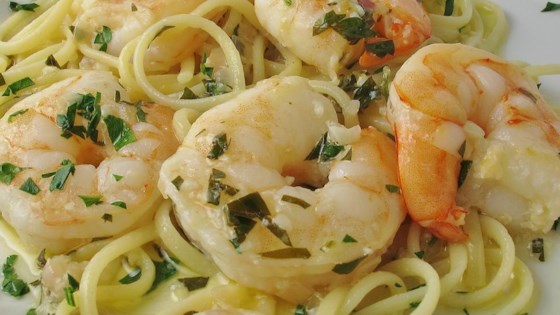 
People like Montalbano, who are involved in solving crimes, have to contend with sordid circumstances and disreputable individuals.  The details of this unsavoury type of work are clearly narrated by the author. I came to develop a liking for Montalbano.  Underneath a tough exterior, he hides a heart of pure gold. He doesn’t always follow the letter of the law, but that’s because he prefers to protect the innocent from the claws of the corrupt kingpins, the latter of which can shape the law to fit their own needs. The law of the corrupt can take on any shape, just as a volume of water can take on any shape depending on its container. Hence, the title of the novel makes sense.  Montalbano is a man of the people. Of the struggling,  sometimes fallible Sicilian people. Despite the pressure put upon him by his superiors, our inspector does not give up until he figures out the details which led to the victim’s death from nothing but ... natural causes. Yes, the fellow did die flagrante delicto, but as Montalbano discovers, the dead body was moved around a few times between the time of death and the time of discovery. In the end, the inspector is able to help and protect some people who would have otherwise gotten framed. However, nothing can be done about the kingpins. They go on.

This novel was written in 1994, during a time of great unrest in Sicily. Mafia wars had caused a significant amount of bloodshed. The politicians were on the take, the average people were scared, and unemployment was high. In the novel, the island is occupied by soldiers from the mainland. This, in fact, was a reality. The Italian government had sent peacekeeping troops into Sicily following the murders of prominent anti-mafia judges. The troops remained in Sicily until 1998; the military operation was dubbed "The Sicilian Vespers" (I Vespri Siciliani, after Verdi’s opera).

In “The Shape of Water,” Camilleri points his finger at the political and criminal upheaval of 1990’s Sicily. I suppose that was Camilleri’s way of pointing his finger at what was going on, and his way of prompting average Sicilians to keep fighting back in order to reclaim their island. It's not merely a murder mystery Camilleri wrote. Through a subtext of social criticism, he exposed the repulsive nature of a corrupt society.

Finally, since I did mention Verdi’s “I Vespri Siciliani,” how about some Sicilian fun?  For our enjoyment, a clip of “Mercè, dilette amiche,” Elena's aria from Act V of "I Vespri Siciliani." I listened to every rendition available on YouTube, from the best to the not so good. I loved this version, recorded in 1955. Maria Callas sings, with Tullio Serafin conducting. Of course, I could also mention Sutherland, who is superb in it, but what makes this version different is that Callas feels each word she is singing!

Enjoy listening to Verdi and Maria, and I hope you smile when you hear that beautiful E at the very end. This difficult aria is rendered so, so beautifully!