FROM STALE BREAD TO DELICIOUS CROUTONS! 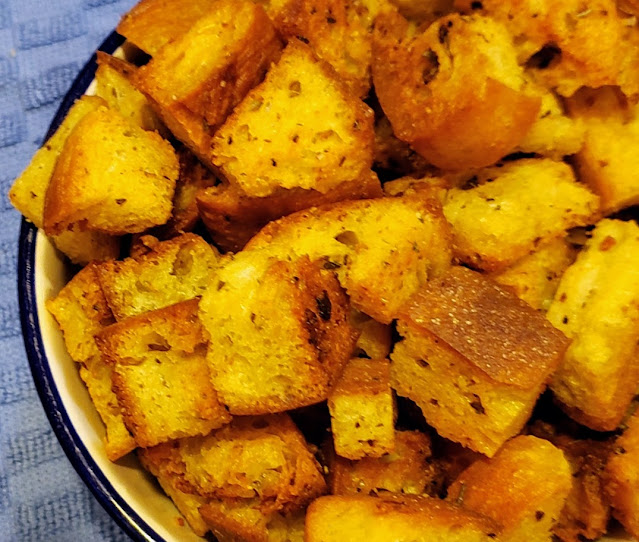 These croutons may be the reason to give up candy!!! 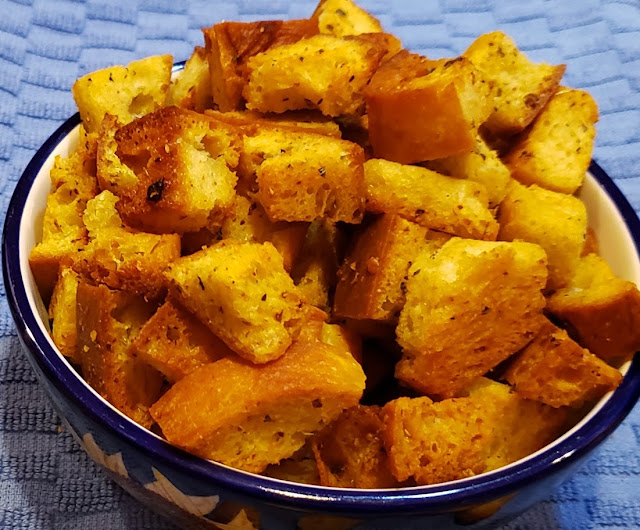 Here's the ultimate way to use up one's leftover bread or rolls. Ciabatta bread will do very nicely as will French bread. How about a combination of the two? Go ahead and make these croutons well ahead of time. They freeze beautifully and will be ready to be used as a topping for that favourite salad or soup!

The croutons are very easy to make, and what's more, this is a recipe without a recipe! Use the amounts you want; let your inner chef take charge! 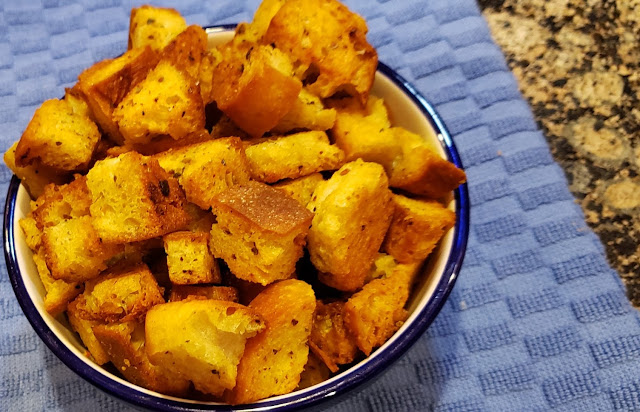 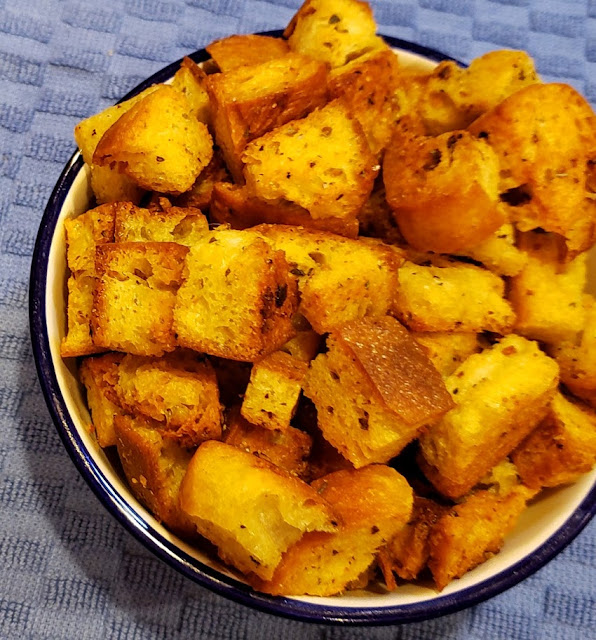 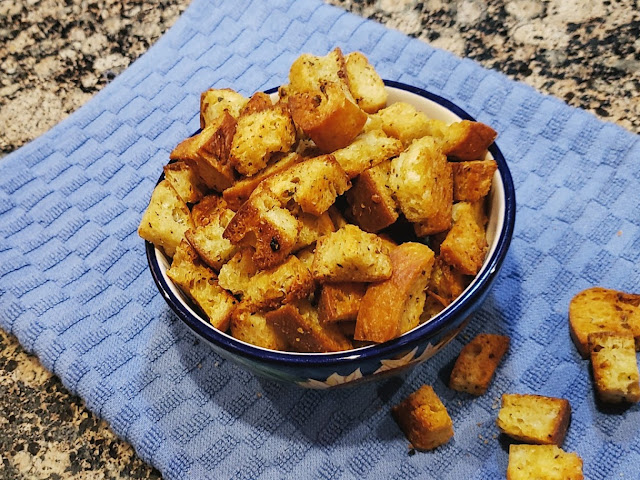 I've made this recipe a few times, either with the fish arranged in a baking dish or sealed up in parchment and aluminium foil parcels. Both are good, but there is something about the parcels which better seals in the flavour and enhances the taste of the fish. If you make the recipe in a baking pan, add a little water or wine to the pan and cover the top while cooking. 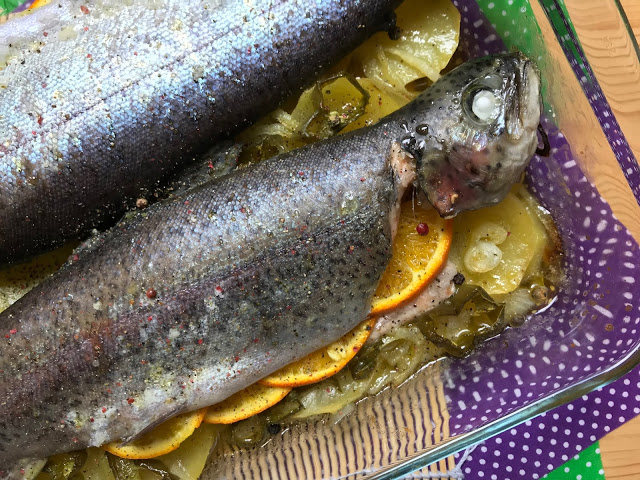 2 trout cleaned by the fishmonger.

a scant amount of salt

·        Wash the fish thoroughly and pat it dry with paper towels.

·        Season the potatoes and cubanelles with salt and pepper.

·      Season the fish with the oil mixture, using it to cover both the cavities and the outside of the fish.

·        Place the onion and citrus slices into the fish cavities.

·        Spread out both sections of the aluminium foil and top it with the two sections of parchment paper.

·        Divide the potatoes and peppers in half and place each half onto the centre of each parchment paper. Top with a sprig of rosemary.

·        You could allow the top of the fish to brown if you so wish. In that case, cook in opened parcels for a further five to ten minutes (or more), depending on the oven.

·        Remove the fish from the oven and place in a serving platter along with the potatoes and cubanelle peppers.

·        Drizzle the cooking juices and some olive oil the top. Keep warm and allow to rest for ten minutes before serving.

Email ThisBlogThis!Share to TwitterShare to FacebookShare to Pinterest
Labels: Seafood 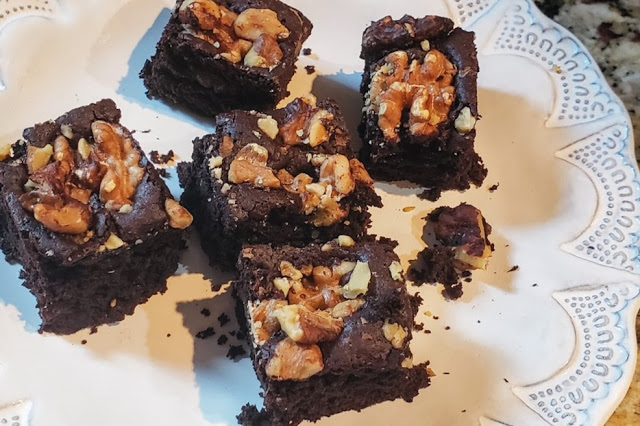 This is definitely a recipe for chocoholics. Notice the scant amount of flour as compared to the chocolate! The brownies are supposed to be gooey and fudgy! Whatever I’ve marked as optional is not included in Miss Katharine Hepburn’s recipe, but I have found that the extra ingredients add a whole new depth of flavour and temper the strong taste of chocolate. Either walnuts or pecans can be used here, but I prefer pecans (unless I am in the mood for walnuts). Cut these brownies into small pieces — about twenty pieces per recipe — and keep them in the refrigerator; they do taste better cold. They can be frozen, too! 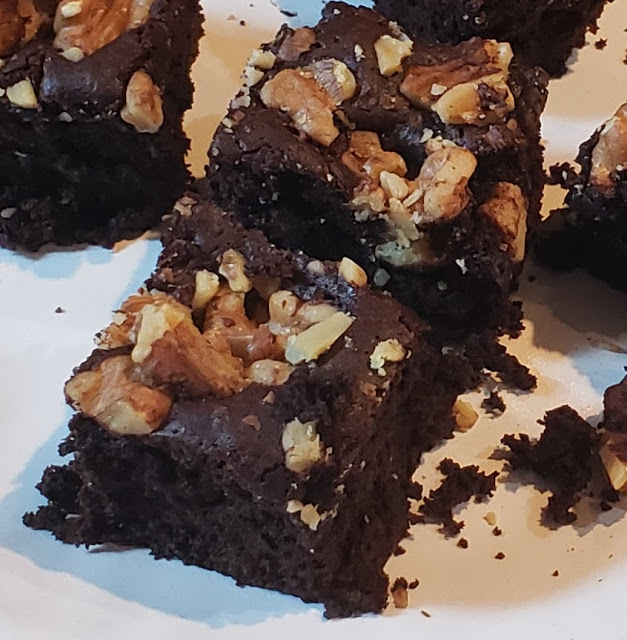 1.     Preheat the oven to 325° Fahrenheit / 160 ° Celsius
2.     Must do: Line an 8x8-inch (20x20 cm) pan with parchment paper. The brownies will stick and will not be easily removed from the pan without the use of parchment paper. Lightly grease the top of the parchment and set the pan aside.
3.     Combine flour, nuts, salt, and baking powder. Set aside.
4.     Bloom the cocoa: Melt the butter and cocoa in a saucepan, stirring until smooth. Add the coffee and stir. Let cool slightly. Transfer to a large bowl and add sugar. Beat with an electric mixer until the sugar is dissolved. Add the eggs one at a time. Add the vanilla extract and cinnamon.
5.     Add the flour mixture to the cocoa mixture. Mix until combined.
6.    Pour into the prepared pan. Bake 35 to 40 minutes, but do not over-bake; the brownies should be gooey and fudgy!!! Let cool, then remove from pan and cut into bars. Cut into small pieces because these are rich brownies. I usually get 16 to 20 pieces. Place the brownies in the refrigerator or freezer. They taste better cold.
7.     Sometimes I add the walnuts on top rather than mix them in the batter. 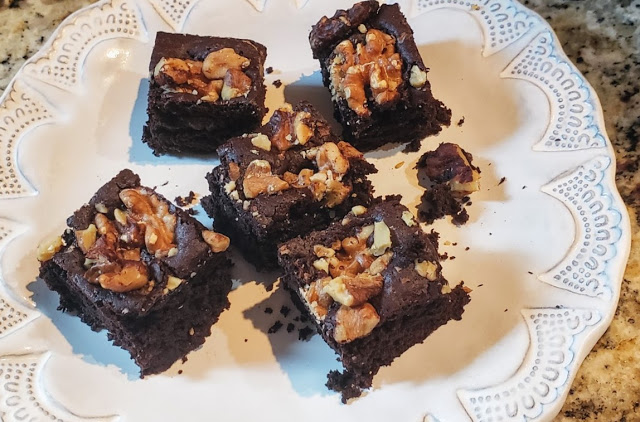 In a medium-size bowl dissolve the yeast in the water. Add sugar and the flour and mix until no lumps are left. Let rise for about twenty minutes.

If using more than one type of flour, sift them together so that they are well mixed.

Some extra flour as needed for the work surface 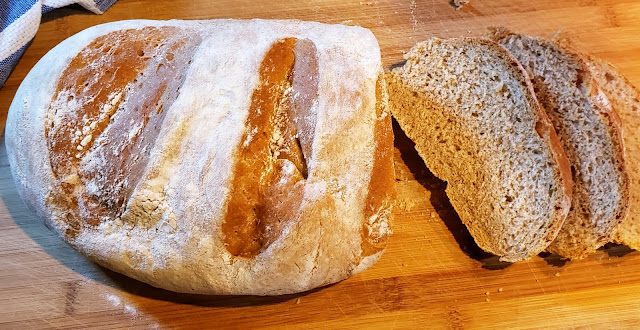 Add the water, oil, sugar, and salt to the bowl of an electric mixer equipped with the hook attachment and mix for about two minutes.

Add the reserved yeast mixture.
Mix on low speed for about a minute.
Begin slowly adding the flour and keep mixing on the low speed. The dough will be ready when it begins to pull away from the sides of the mixing bowl.

Turn out onto a floured work surface and continue kneading until the dough is smooth and no longer sticky.

Place the dough in a lightly oiled bowl and roll it around in the oil until it's covered on all sides. Cover the bowl with a towel and allow the dough to rise until it has doubled in size, about two hours.

Punch down the dough and move it on a floured work surface. Knead it for about a minute or so and divide it into two to three equal portions. Shape each portion into a loaf.

Place the loaves onto ungreased cookie sheets.
Score the tops to your liking.
Cover each loaf with a towel, and allow to rise for one hour.

Have the oven preheated to 400 degrees Fahrenheit/200 degrees Celcius.

Bake for about thirty-five minutes. You'll know the bread is done if when tapped on the bottom the loaves sound hollow. Allow the bread to cool before slicing. 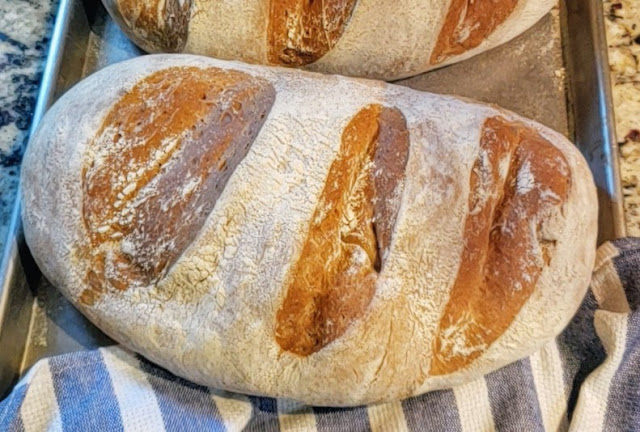 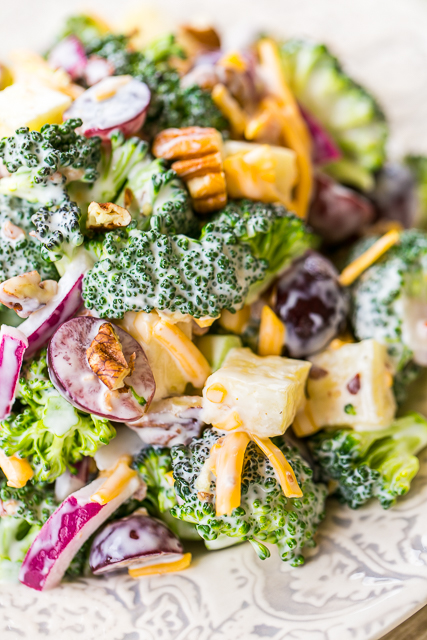 All the broccoli enthusiasts are bound to adore this gorgeous salad! It's festive and it's both tangy and sweet. It's got multiple tastes and textures to enjoy which blend together very well. Even if one dislikes broccoli ... I don't think there are any people who dislike broccoli, but even — let's say hypothetically, even if there were, there is so much going on in this salad that the broccoli can be overlooked very easily.

Let's face it: whatever its merits, the taste of raw garlic is heavy and may even cause stomach upset. However, there is always that lovely concoction called garlic confit which comes to the rescue by transforming raw garlic into a wonderful, mashable condiment. Yes, garlic confit turns the taste of garlic into a soft, sweet, and mellow experience!

Garlic confit is made by slow-cooking garlic in a bath of olive oil that's flavoured with spices and herbs. In this way, garlic attains concentrated flavour while losing its sharp acidic taste.

Each time I need garlic confit I make a small batch; it's easy and quick to make. I have what I need to use and there is a portion left over for adding to vegetables during the week to come. How about garlic confit on garlic bread??? Try it!

I start by peeling two heads (or three if they are on the small side) of garlic. The other ingredients I use are bay leaves, thyme, rosemary, peppercorns, and a little salt.

I grab a baking dish; a glass one will do the job nicely. In go the peeled garlic cloves, bay leaves, thyme, rosemary, salt, and peppercorns.
I add olive oil and a smidgeon of water to cover.
I cover the dish and place it in the oven.
Baking takes about fourty five minutes. When the garlic cloves become soft and slightly golden in colour, the garlic confit is ready.
To store: Cool the confit. Transfer the contents to a clean resealable jar.
During cooking, the garlic loses its acidity, therefore bacteria will build up if the jar and its ingredients are not kept clean and refrigerated. The jar must always be kept refrigerated and care should be taken that the lid and mouth of the jar aren't contaminated. Each time garlic is needed, it must be retrieved with a clean utensil. Don't place the same utensil in the jar twice. If more confit is needed, another clean utensil should be used.  For me, maximum storage time is a week to ten days.
Posted by Ana at 15:20