How To Make Italian Seasoning

Italian seasoning is very easy to assemble and great to have around just to add a quick dash of flavouring to one’s recipes.

How much of each herb to use is a personal choice that depends on one’s taste. The beauty of making your own is that you get to decide which flavours and how much of each to include. If partial to a particular herb, add extra. If not, cut down on the amount or simply omit it. Here’s how I make my Italian Seasoning:

1 or 2 teaspoons of red pepper flakes; they are spicy, therefore, consider how much to add according to preference

A note about the basil:

Note: I usually omit the dried basil when I make this mix because I believe basil loses much of its flavour once it’s dried; I would much rather add the fresh variety which is readily available year-round.

Fresh basil can be purchased at the market during the winter and in summer it can be very easily grown in an outdoor container.

Combine the dried herbs and place them into a jar fitted with an airtight lid. Make sure to write the date on the jar. The mixture will last about a year – no longer than that because dried herbs lose their potency over time.

To test if a dried herb is still good, rub a pinch of it in your palm and smell it. If it leaves behind a strong aroma, it’s good to use.

Seafood Salad Italian Style for Christmas or for Lent 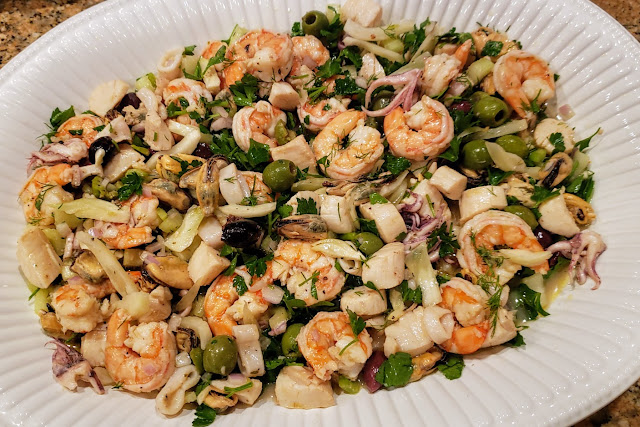 The salad contains lots of steps but it's not difficult to make. The best way to go about preparing it is to have all the ingredients ready and take it a step at a time. My list is given in the order that the ingredients should be prepared, from the ones that take the longest to the ones that should be made as the salad is ready to be served.

I hope you enjoy my version of Italian seafood salad. 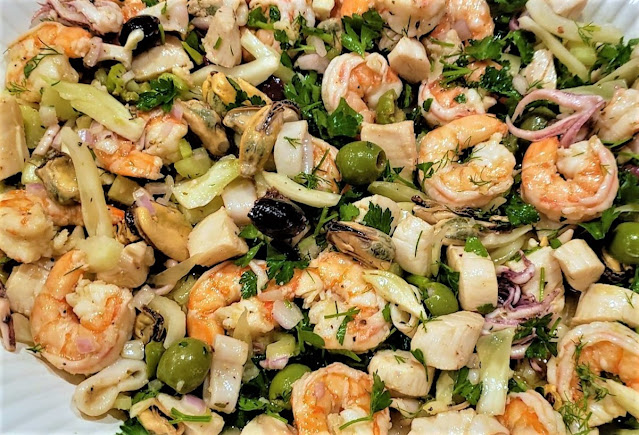 a handful of caper berries drained and rinsed

fresh flat-leaf parsley leaves, about half a bunch, chopped

some olive oil for topping the salad before serving

for the poaching liquid

3 cloves garlic cut in half

peel of one lemon

3 stalks of celery with leaves, cut the celery into large chunks

a few stems of parsley

a few stems of thyme

for the salad dressing

salt and pepper to taste

some of the poaching liquid

Directions:
to tenderise the calamari

a sprig of thyme

one cup of white wine

Scrub the mussels clean and remove any beards protruding from their shells. Discard the mussels with opened or broken shells. Soak the good mussels in cold water for about fifteen minutes. This will clean off any remaining sand. Rinse them once or twice more and prepare to steam them.

Add the parsley, thyme, and wine.

Bring the wine to a boil, add the mussels and sprinkle a small pinch of sea salt and a little black pepper over the mussels.

Cover the saucepan and let the mussels steam for about four minutes. Once they have opened, remove the saucepan lid, allow the mussels to cool, then remove them from their shells. Discard the shells, place the mussel meat into a bowl and set the bowl aside.

The broth remaining in the pan can be added to the poaching liquid that will be used for the rest of the seafood.

Add all the ingredients for the poaching liquid into a large Dutch oven. You may also want to add the liquid leftover from cooking the mussels.

Bring to a boil and add the seafood in turns:

Wash the shrimp and add it, let cook for three minutes, then remove to a bowl and let cool.

Wash the scallops and add them to the liquid. Let cook for three minutes, then remove to a bowl and let cool.

Make sure the calamari is washed well and add it to the poaching liquid. The calamari will be sliced into rings once it's cooked and has cooled to the touch. Let cook for three minutes, then remove.

Use the poaching liquid to cook any other seafood you may want to add. This can include a lobster tail or lobster claw meat, or shelled clam meat which is readily available around Christmas time. You could add salt cod or fresh cod as well.

If eating this salad for Greek Lent, it will not always be appropriate to include cod. Shellfish is a safe bet but check with a religious calendar to find out if bony fish is allowed.

All the seafood should be removed from the poaching liquid and allowed to cool. Do not overcook it. Three to four minutes maximum cooking time per type of fish is perfect.

preparing the salad vegetables and the salad itself:

The list for the salad vegetables is given above. Mix all of them well. Mix all the seafood and combine it with the vegetables. Toss gently. 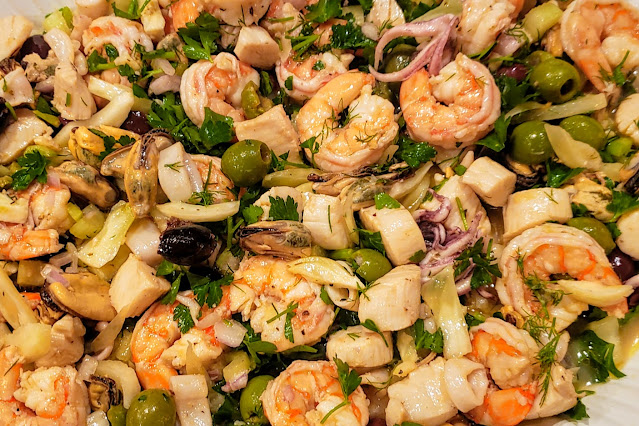 So easy to do! All the ingredients are given in the ingredients list. Have them ready and combine all of them except for the parsley and dill. Whisk them well and your salad dressing will be ready!

Pour the salad dressing on top of the seafood salad. Mix and keep in the refrigerator for about four hours or overnight. The salad is to be served cold.

When ready to serve, place the salad onto a decorative platter, add the parsley and dill, toss and serve accompanied by lemon slices. Pour some extra virgin olive oil on top of the salad just before serving. 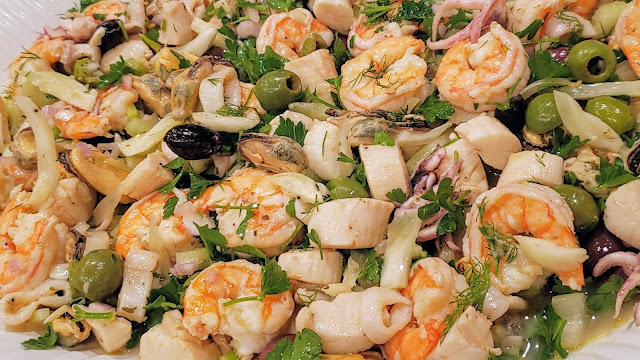 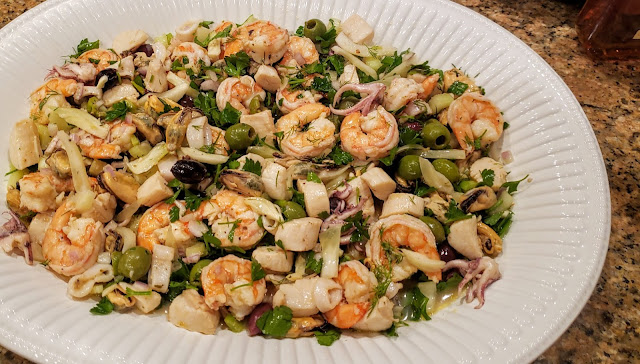 Fruity and Citrusy Sweet Potatoes for the Holidays!

5 tablespoons unsalted butter cut into cubes, plus extra for greasing the pan 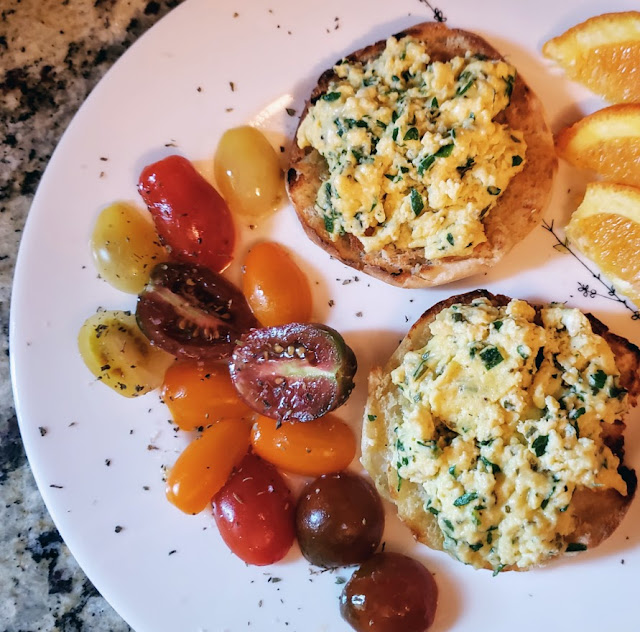 I would call it the best Sunday breakfast ever! It can be ready in minutes and it's delicious. Something so very savoury and great tasting happens when combining eggs and tarragon! This recipe will make enough to serve breakfast for two. Place the eggs on toasted English muffins, accompany them with fruit and sweet grape tomatoes, sip your coffee or your tea, and enjoy. Perfect. 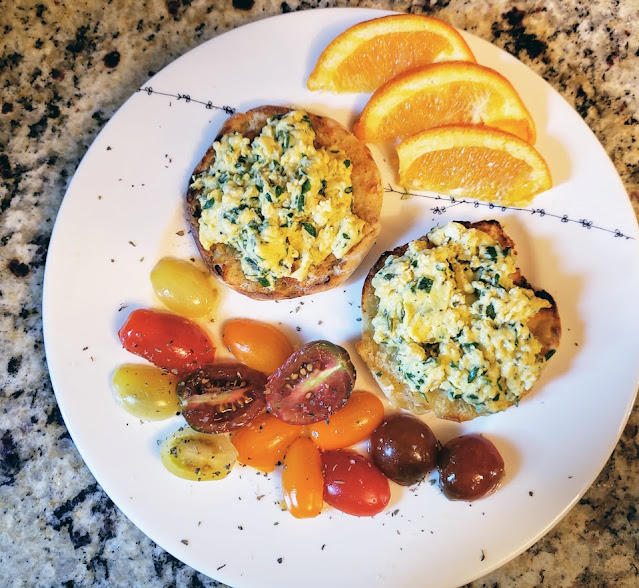 1 tablespoon whipping cream or your choice of milk

salt and pepper to taste

fruit of your choice

a few grape  tomatoes sliced in half

a touch of olive oil, oregano, and fleur de sel 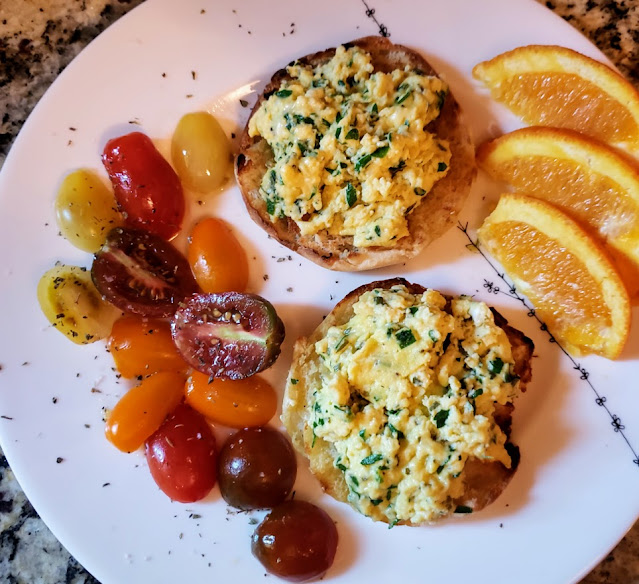 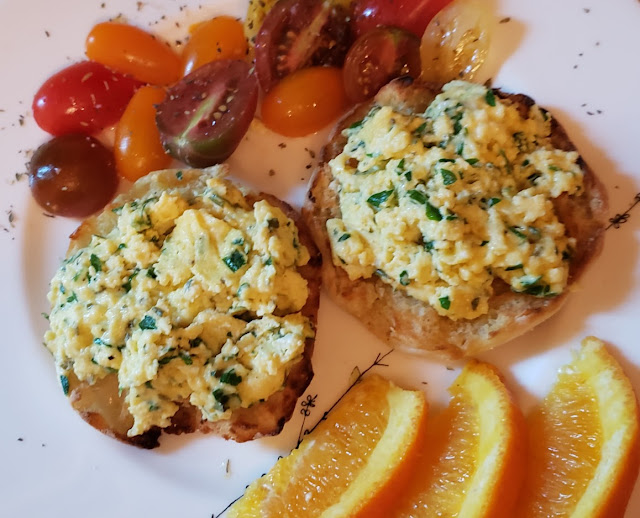 Cut up the cream cheese into small chunks and bring it to room temperature. You want it to be in nearly melting condition so go ahead and place it in the microwave for about 25 seconds.

Into a large bowl add the eggs, tarragon, parsley, cream or milk, the pinch of grated Parmesan cheese, Dijon mustard, and salt and pepper.

Stir in the warm cream cheese and beat all the ingredients until they are well combined.

In a nonstick skillet over medium heat melt the butter.

Pour the egg mixture into the skillet and begin stirring right away. Keep stirring and folding until the eggs are creamy and start to appear set, about 4 minutes. Don't overcook the eggs. If they appear loose, that's fine because they retain heat and will finish cooking on their own.

Season the tomatoes with a touch of olive oil, a little oregano, and a little fleur de sel.

Top the toasted English muffins with the eggs. Serve them alongside the tomatoes and some fruit of your choice. 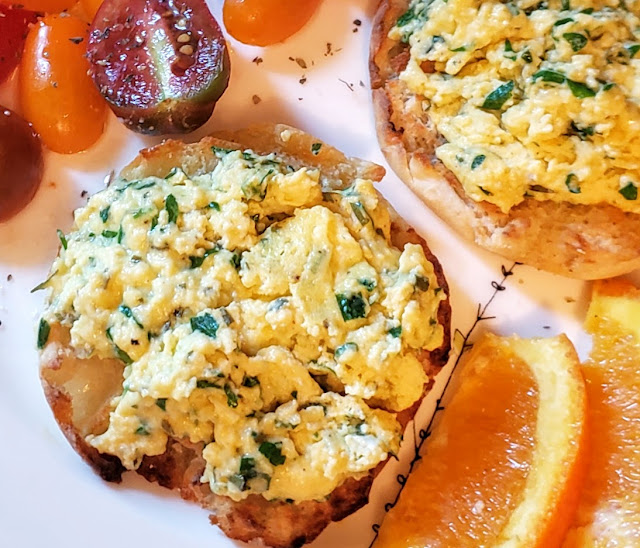 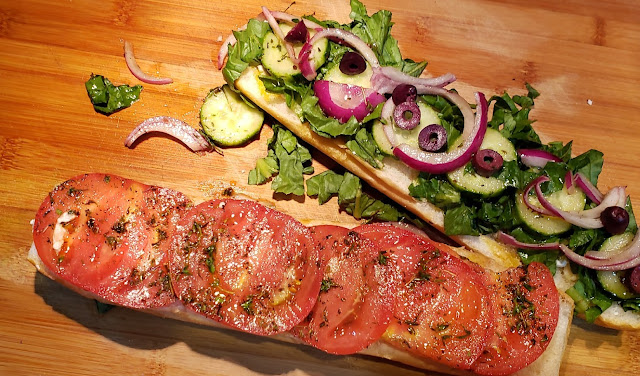 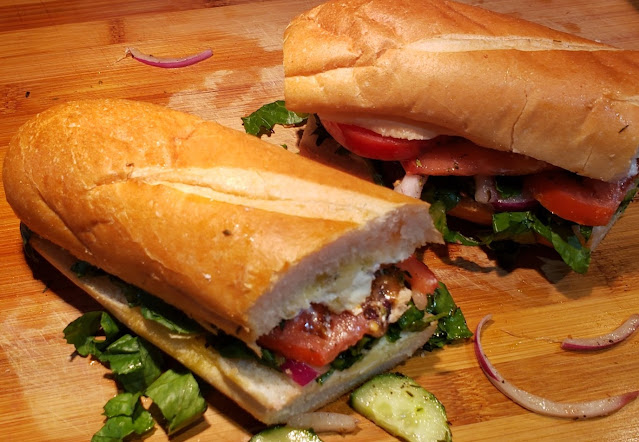 What can one do with a harvest of wonderful, tasty tomatoes? Making sandwiches is the simplest answer. Tomatoes are a great accompaniment to feta cheese, so I combine them together along with some greens. Oregano, olives, cucumbers, all these ingredients belong together. One can't go wrong!
Ingredients
2 rolls
2 large tomatoes, sliced
some arugula
a few leaves of romaine lettuce, chopped
1 cucumber, preferably an English cucumber, sliced
half of a red onion sliced thinly
5 Kalamata olives, pitted and sliced
For the cheese base:
4 ounces feta cheese
2 tablespoons olive oil
a handful of basil leaves
1/2 teaspoon dried oregano
black pepper
For the dressing:
3 tablespoons olive oil
1 tablespoon balsamic vinegar
1/4 teaspoon Dijon mustard
1 teaspoon dried oregano
1 teaspoon thyme leaves
salt and pepper 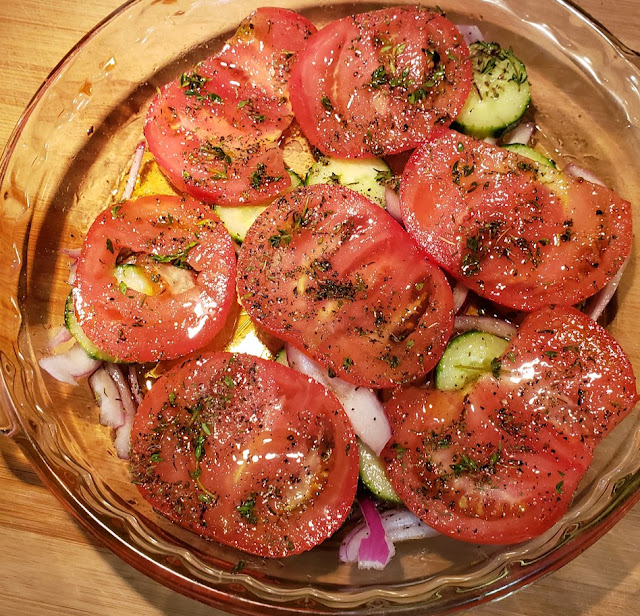 The veggies absorb lots of flavours if they stay in the dressing for about five minutes. 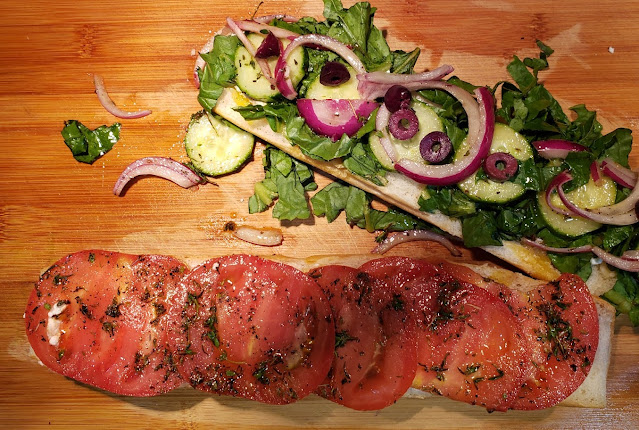 Directions:
Gather the ingredients for the cheese base and whip them together.
Mix together the ingredients for the dressing.
Arrange the lettuce, arugula, tomatoes, cucumbers, olives, and onions on a plate.
Pour the dressing over them and let them sit in the dressing for five to ten minutes.
Meanwhile, split the rolls in half and toast them lightly.
Spread the whipped cheese over each half of the rolls.
Arrange Kalamata olives over the cheese.
Top two of the sliced roll pieces with greens, onions, and cucumbers.
Top the other two halves with the sliced tomatoes. Make sure you pack the tomatoes tightly, or if you'd like, arrange them in two rows one on top of the other. You want lots of tomatoes!
Bring the two halves together and serve.
Alternately, you could eat this as an open-faced sandwich: just build the greens and tomatoes on top of the cheese. It won't necessarily be a hoagie but it will still taste delicious!

An Open-faced version with some gorgeous tomatoes ... some bright green veggies ... but this roll was kind of large, so I cut it in half which made a perfect lunch for two people! 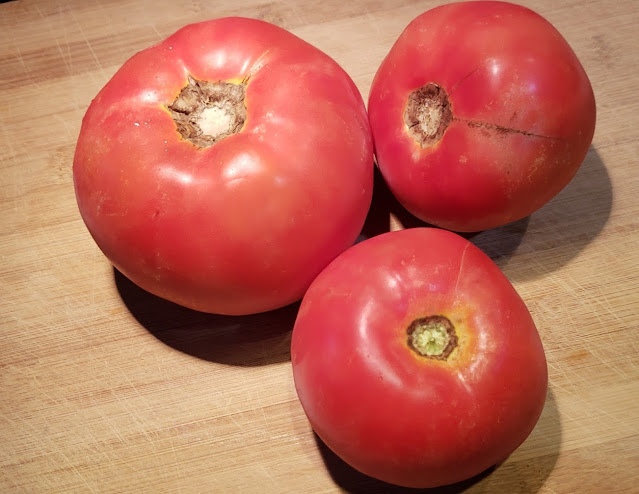 From the first harvest of summer tomatoes!
Posted by Ana at 01:30 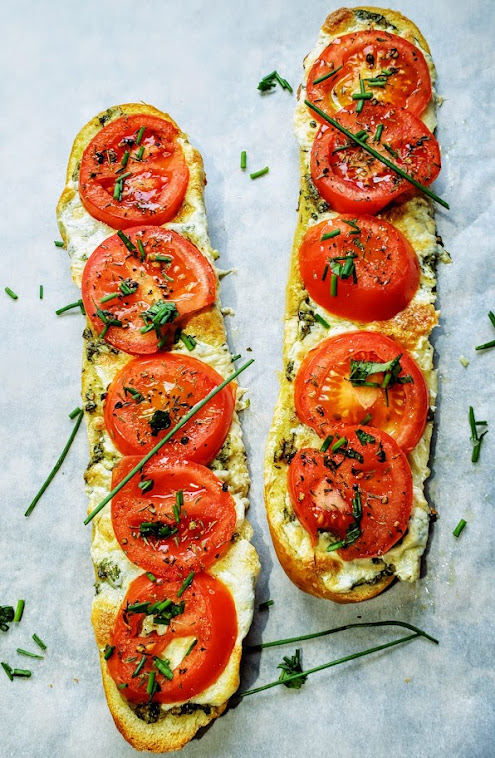 A superb way to use summer's tomato and basil bounty is to make this delicious sandwich. I used a French demi-baguette as a base for this "culinary" creation of mine. It was very fresh and just the right size. But frankly, I found the baguette too dense for the sandwich (it's not often you'll hear me complain about bread). What one wants here is a crunchy loaf that will support what it's topped with while allowing the basil and tomatoes to take the leading role. So you may want to try an Italian loaf which is not as dense as a French one. Whatever you do, don't use sourdough bread ... A rosemary loaf would be nice. How about an olive loaf??? There are lots of options, therefore make the recipe your own by choosing your favourite type of bread! The ingredients listed are enough for a smaller roll, one that makes a perfect lunch for two people. If you choose to go for a larger loaf, you'll have to double up on the ingredients. 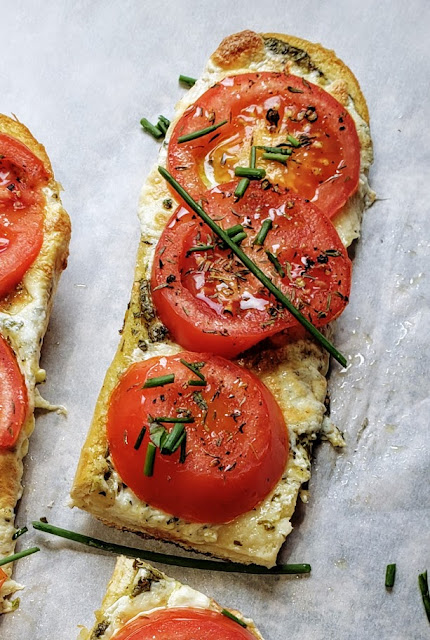 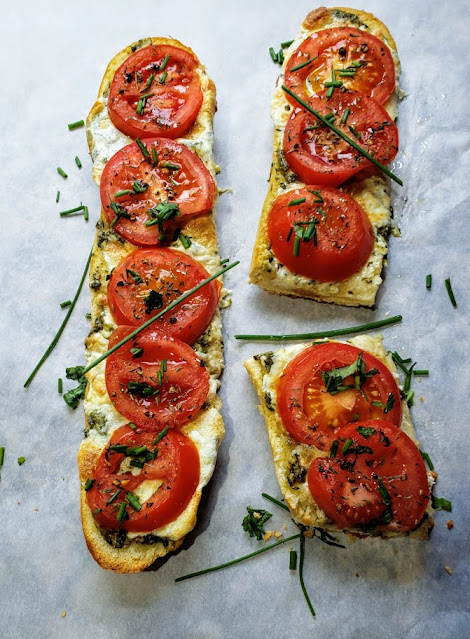 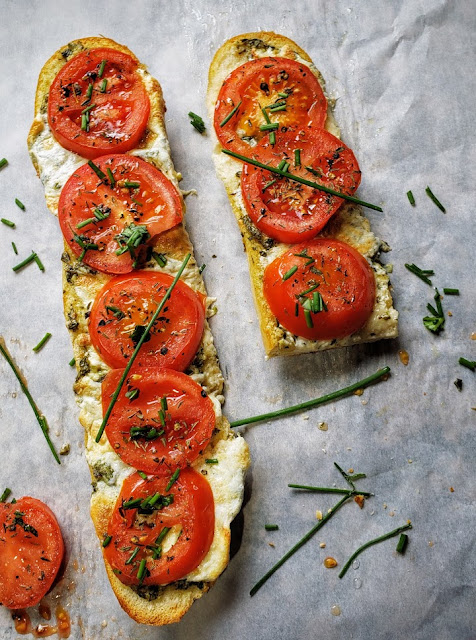 Ana
Welcome to Sweet Almond Tree, this blog of mine meant to store my recipes. I started building it in 2009, and it's still right here, in this quiet, out of the way spot of the Internet you've just stumbled upon.