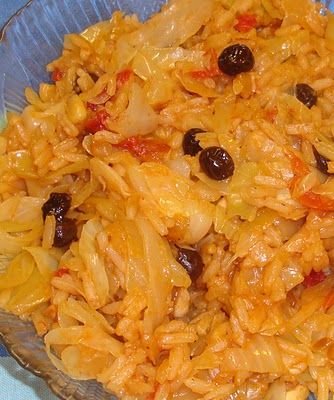 Cabbage, the super vegetable! Cabbage is very low in calories - 35 calories for one cup. It's a good source of protein, vitamin C, vitamin A, potassium, calcium, and fibre. It contains nutrients with anti-cancer properties, something cabbage has in common with the other vegetables in the cruciferae family to which it belongs. "Cruciferous" plants are so named because they bear four-petaled flowers, thus having blooms reminiscent of a crucifix. Some of the other vegetables in this family include broccoli, cauliflower, kale, Brussels sprout, turnip, radish, rapeseed (from which canola oil is processed), watercress, etc, etc, all of them with nutrients similar to those of cabbage, and all of them good for you.


At home, we remember the cabbage dishes grandmother used to make. She was a native of Thrace, a province in South-Eastern Europe, a region where cabbage and sauerkraut are popular cooking ingredients.


Below is one of grandmother's recipes for cabbage: it's tasty and it's good winter fare. Sometimes this dish was served on its own, other times it accompanied roast chicken. I can still picture it in its serving platter in the middle of the table!