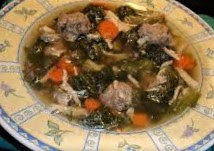 Mrs D was of Irish descent, a Canadian from Newfoundland, but she had the reputation of making the best Italian home cooked meals in Philadelphia. That's a lot to say considering that there is such a large Italian population in the Philadelphia area. Many will disagree and nominate someone else to take over Mrs D's spot. I understand, however, I will respectfully disagree.

A home-cooked meal made by a person one holds dear and shared with good company makes for a time well spent. I am grateful to Mrs D and to her family for giving me so many wonderful memories!

Mrs D, whose first name was Carmel, met Richard D, her Italian-American husband-to-be when, during the Korean War, he was stationed at an American air force base in Stephenville, Newfoundland. The two fell in love and were soon married. Carmel found herself ensconced in her new home in Philadelphia. It was West Philadelphia to be exact, St Donato's parish, Overbrook.

The Overbrook section of West Philadelphia was one of the neighbourhoods where a large population of Italian Americans called home. Some of them still live there, most (like Mrs D and her family), have moved away. Carmel became close with her in-laws, especially with Anne, her new aunt. Aunt Anne taught Carmel all about Italian cooking, and soon Carmel was on her way to becoming a superb Italian home cook.

We enjoy those succulent little meatballs swirling in aromatic chicken broth, and we reminisce and celebrate. Mrs D, Carmel, Carm, I remember you, I miss you, I love you!


Step 1: Make the chicken broth.
You can use store-bought chicken broth, but we all know that to have a good soup base we must make our own broth, with chicken and soup vegetables. Store-bought broth is all right to use if you need to make something in a jiffy, but for a special occasion, do start from scratch. To lessen the labour involved, the broth can be made a day before, or even a month ahead and then frozen. Here's how:
Step 2: Prepare the escarole.
Step 3: Make the meatballs.