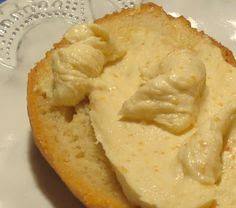 I was young and just learning the ropes around the kitchen. A holiday was coming, and we were to have a big gathering for dinner. I wanted to have something special to accompany our meal so I decided to make a taramosalata, my first effort at making the famous Greek appetizer. This was many, many years ago, when Greek cookbooks were difficult to find at the bookstore, and when no one had even heard of the Internet. Can you imagine such a time? Anyway, I knew that Craig Claiborne had a recipe for tarama in his tome "The New York Times Cook Book." I followed his recipe and the results were wonderful. To my mind, this was and is the quintessential recipe for tarama! It's tangy, the olive oil gives it a great aroma, and the taste is as close to perfect as you can get. It reminds me of the tarama we order during Greek summer vacations when we descend ravenous at seaside Greek tavernas after a day of sun and sand and swimming. Here is Craig's recipe, with only one alteration by me: I added extra lemon juice. 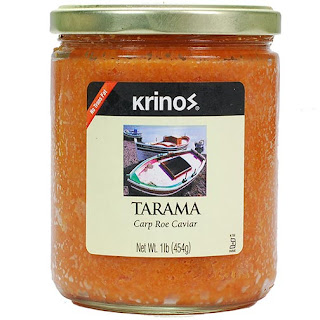 Bottled tarama purchased at the supermarket

What we purchase as bottled tarama is the salted and cured roe of carp fish. What is roe? That’s the ripe ovary which contains masses of fish eggs. Carp roe (or hard roe), is aged for about a year before it’s ready to be sold as tarama. Tarama is not eatable plain and should be turned into taramosalata before eating. Taramosalata is made by adding bread, lemon juice and oil to a portion of tarama. The mixture should have a light orange colour. The more it is diluted with bread and oil, the lighter its colour becomes.
Posted by Ana at 23:06