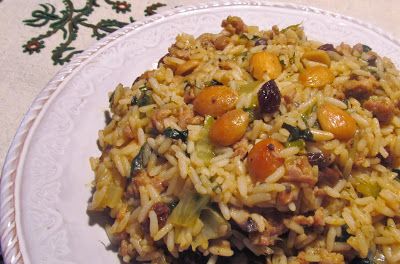 Love this rice dish!  It is a pilaf (pilafi in Greek), meaning it's cooked in broth and has vegetables mixed into it. Various versions of pilafs are popular in the Middle East, North Africa, Spain, Greece. I bet once upon a time there was an original recipe that got carried by ancient traders from Mediterranean coast to Mediterranean coast. People loved it, and adapted it to suit their tastes. So today we have all these rice pilaf variations, and as far as I am concerned they are all great. I never say no to rice! Which I find ironic now that I think of it, because up until the age of twenty or so, I wouldn't go anywhere near it ... Greeks have a plain version of pilaf made with just broth and butter, and then they have this one. It can be served on its own, in which case I can have a whole plateful, or it can be served as a side dish in which case I can have two tablespoons. Correction: three tablespoons. It can also be used as a stuffing. Come autumn, stuff squash with it why don't you? Here's how to make Greek rice pilaf: