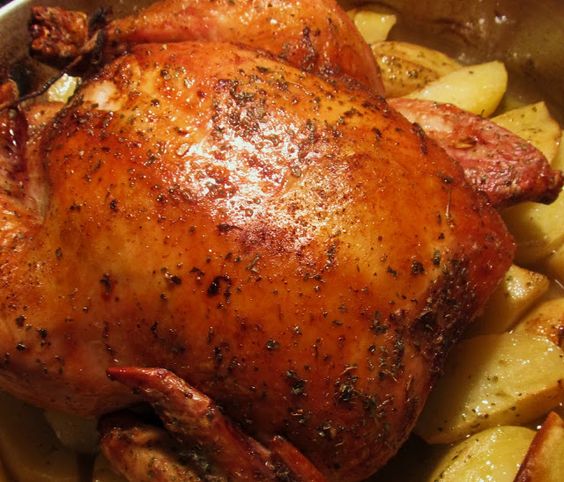 First off, although it's easy to guess:  Rigani in Greek means oregano. This recipe is representative of one of the most typical way Greeks prepare roast chicken. It's fast to make and delicious. It contains the holy trinity of Greek seasonings: olive oil, lemon and oregano, and believe me, the chicken here gets seasoned with a lot of oregano. Don't be stingy with the stuff.  I 'm always surprised at how juicy the chicken is when it comes out of the oven! I think the meat stays moist because of the way the chicken skin is prepared: a large pot of boiling water is poured over the uncooked chicken. The effect of this is to toughen the skin a bit. Since the skin gets tougher, it protects moisture from escaping during baking, and so the roasted meat is juicier.
The classic accompaniment to this dish are roasted potatoes, which are baked alongside the bird. Love it!

Along with the potatoes I usually serve vegetables such as string beans or carrots, and a green salad made up of arugula or Romaine lettuce. Sometimes, if they are available, I'll serve boiled dandelion greens seasoned with olive oil and lemon (plus oregano). Also, one of my favourite things is to have feta cheese on the side. That's a habit I acquired during childhood when my aunt would mash a bit of feta into my potatoes so that I would find them more palatable ...  Thanks, auntie, it worked! 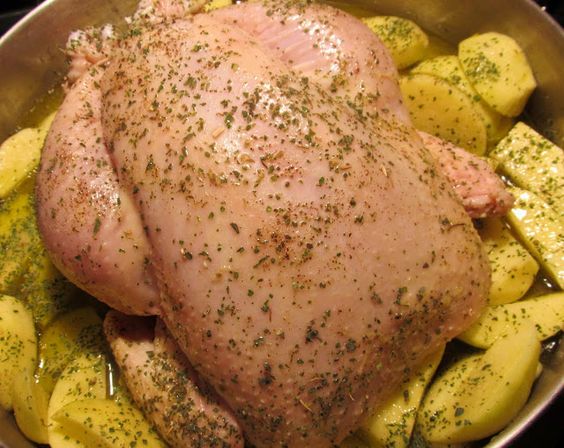 One 3 to 4-pound chicken (1.5 to 2 kilograms), organic is best
Salt and pepper
dried Greek oregano
1 small onion, peeled and cut into quarters
2 cloves garlic smashed and peeled
4 large baking potatoes, or use more if you want leftovers
the juice of two lemons
1/4 cup olive oil