RISI E BISI and Across The River And Into The Trees we go! 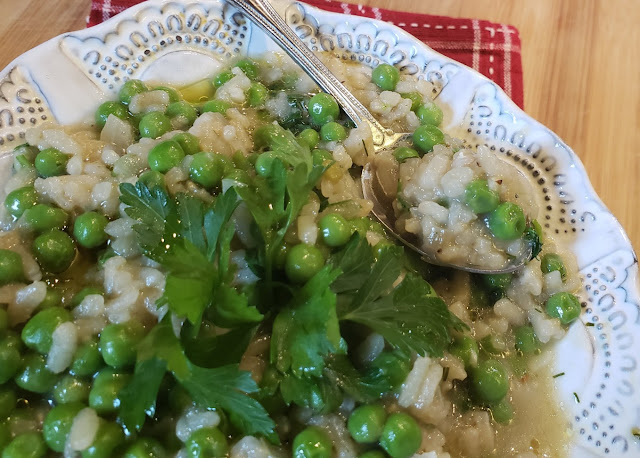 Give me peas and pasta, give me peas and rice, I love them both. Who can resist those glorious, gratifying combinations? Who indeed, especially when fresh peas are in season! I cook Risi e Bisi often, but I refer to it in the boring vernacular: risotto with peas. What's wrong with me? What indeed? This Venetian recipe deserves a more poetic name. Yes, Risi and Bisi!
I've been reading Hemingway's "Across The River And Into The Trees," for this edition of  Novel Food.  Hemingway's novel is set mostly in Venice and it seems to me that a plateful of Risi e Bisi will make a very nice accompaniment to my reading endeavours. Of course, not a single character in the novel eats risotto (or risi e bisi). They tackle huge lobsters served with mayonnaise, they order scaloppine, and cauliflower and mashed potatoes and lots of wine. As is usual with Hemingway, there's lots of alcohol making the rounds, and lots of guns and war stories and hunting and eating of freshly killed animals.
The characters saunter in and out of Harry's Bar, and there's one lively passage in which the protagonist visits a Venetian market and orders about a dozen fresh oysters. He shucks them in masterful strokes and eats them on the spot, savouring their seawater liquor ...
Let me stick to my Risi e Bisi. However, I do intend to order a vicarious order of oysters if they can be shucked for me by Hemingway. We'll share them on the spot, right in that very same Venetian market. 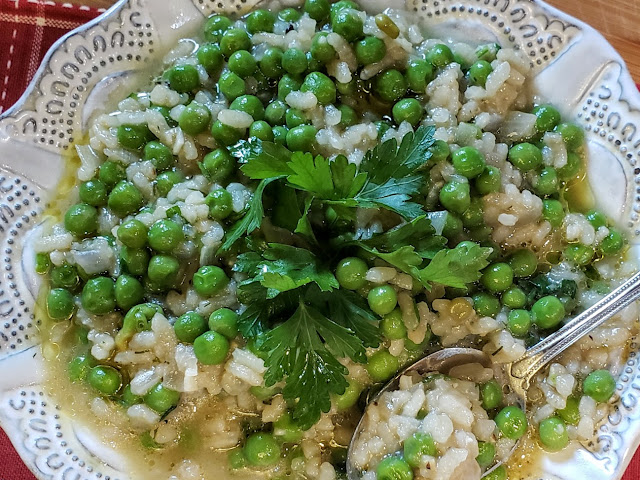 Venetians cook risi e bisi to a consistency that's somewhere between a soup and a risotto. Call it a thick soup and eat it with a spoon. This dish is served especially on the 25th of April to celebrate the feast day of St. Mark, the city's patron saint. Here's how I cook Risi e Bisi, a Venetian treat:
Ingredients:
8 cups vegetable broth (or as needed)
3 tablespoons olive oil
1 small onion, chopped well
2 celery ribs, chopped well
black pepper to taste (no need to use salt, there is salt in the cheese and the broth)
1 cup arborio rice
2 cups peas (if fresh peas are available, by all means, buy them and use them. Shell them to yield 2 cups and reserve the pea shells for the broth)
if frozen peas are to be used, have ready 2 cups of pea shells such as from snow peas
3 or 4 tablespoons chopped fresh parsley
1 tablespoon chopped fresh dill
¼ cup grated Pecorino Romano cheese
Directions: 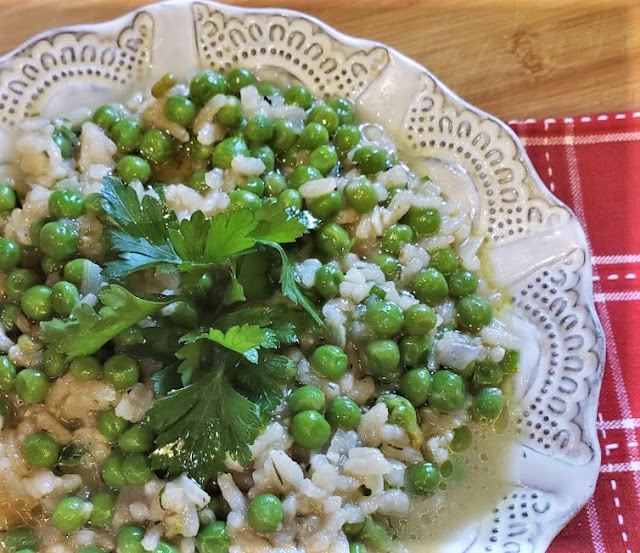 Hemingway's novel "Across The River And Into The Trees" is about a love affair. But there's not much of a love affair between the fifty-year-old protagonist, Cantwell, and his eighteen-year-old Contessa. The two do try to share some romantic moments, however, more pronounced is the love Cantwell has for Venice, a city which to him is unrivalled.

Cantwell is a battle-scarred army officer with advancing heart disease. He’s facing the fact that he is near death. During a visit to Venice, he reminisces about the time he spent there as a young soldier. It was during World War I, and it seems that every Venetian corner reminds him of that time. It was a time when he believed that he was immortal, and immortal even in battle, but presently he realizes that his immortality is lost or never was.
I think that's why he has one last, spontaneous affair with someone so much younger than himself. He is trying to recapture a time and a youth that are gone forever. The Contessa, in turn, is mourning her deceased father: we get the sense that her attraction to Cantwell stems from a wish to be a daughter again.
Not a prudent union if it can even be called a union. Hemingway by no means convinces us that there is a real meeting of the souls between these two. He may be purposefully pointing against it. It’s ironic that Cantwell often calls his young love interest “daughter,” something certainly considered an unfortunate misnomer in today’s society, but alas quite acceptable in 1950, the date of the novel’s publication.
While on a hunting trip, Cantwell summons up recollections of his past. After a period of introspection, he experiences chest pains and dies. He faces his approaching death with bravery. He goes into death with the same sense of purpose he had when going into battle. That's the Hemingway we know (and love)? The character has resigned himself to the inevitable and faces it with bravery. He accepts the rule of the jungle and the survival of the fittest.
The writing appears a bit tired in some sections. One senses the ebbing of Hemingway's powers. By this time the author spent his time mostly drinking and he was in and out of depressive states, situations not conducive to the art or writing.
An interesting novel, but one that lacks the evocative power of Hemingway's earlier work. However, realism is a dirty business, so perhaps evocations are not needed here. 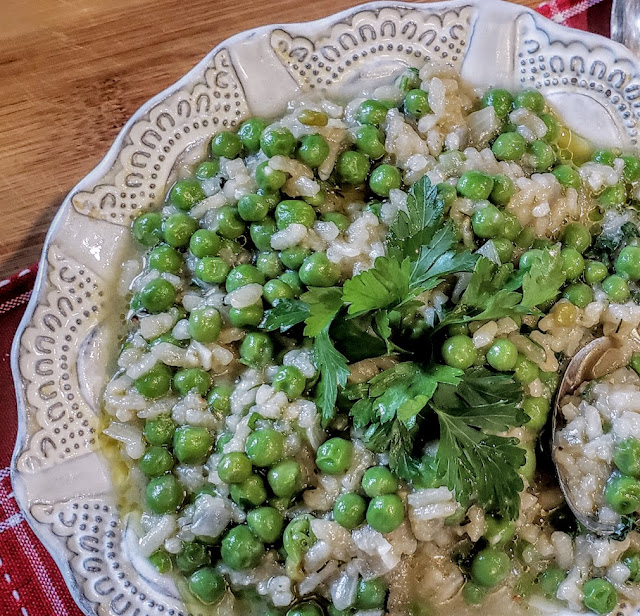 This is my contribution to Novel Food, the literary - culinary event hosted by Simona from Briciole. You can find the round-up of the 17th edition of Novel Food here.
Posted by Ana at 23:22