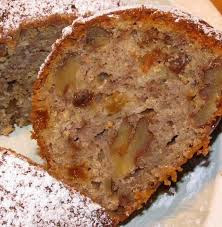 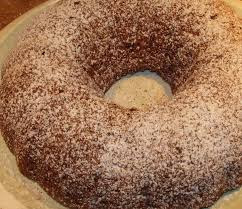 This banana raisin oat bread tastes really good, but is it a cake or is it bread?  It tastes more like cake, but it's called bread. What's the deal here?  Well, actually, it's a quick bread. It is so named because it doesn't use yeast as a leavening agent.

Yeast requires hours and optimal temperatures to cause bread to rise. Baking powder, which contains baking soda (base pH) and cream of tartar (acid pH), acts quickly. The acid/base combination reacts when introduced to liquid, causing carbon dioxide to form. Consequently, the batter expands and increases in volume. When baked goods rise quickly, they are called quick breads. Cakes, muffins, and scones, are types of quick bread.

Banana bread is a cake, and officially a quick bread, but it's referred to as banana bread because, I suppose, it's faster to say banana bread than banana quick bread. Fine. That solves the mystery for me. I thought I would share the information with you. I am not a know it all, but I like to do my research. I just hope I can remember all this a year from now.  But then I will always have this post to remind me. One thing I won't forget is how delicious this cake (quick bread) is. I've already had requests for the recipe. Here we go ladies, my post is finally ready. Get out those bundt pans! 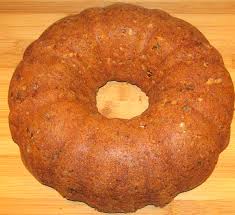 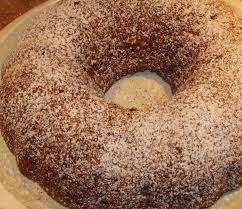 Directions:
Preheat the oven to 325º F.  Grease a bundt pan and set it aside.
Into a bowl combine the flour, baking soda, baking powder cinnamon and salt.  Stir well to combine.
In the bowl of your mixer add the sugar and melted butter.  Beat until smooth.
Add the eggs one at a time, mixing after each addition.
Add the bananas and vanilla extract and mix.
With a wooden spoon gently fold in the raisins, oats, and walnuts.
Add the flour mixture in three batches folding gently after each addition.
Pour the batter into the prepared bundt pan and bake for about 1 hour and 15 minutes.
When ready, a knife inserted into the centre of the quick bread should come out clean.

Remove the pan from the oven and place it on a rack to cool.  After about 20 minutes invert the pan onto a plate.  The banana bread should slide on the plate.
Let cool another half hour.  Mix some powdered sugar with a little cinnamon and sift it on top of the banana bread to decorate.  Slice and enjoy a nice treat! 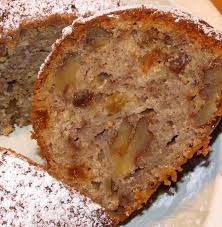