Chicken Corn Soup with Rivels and Saffron: in Praise of Pennsylvania Dutch Saffron 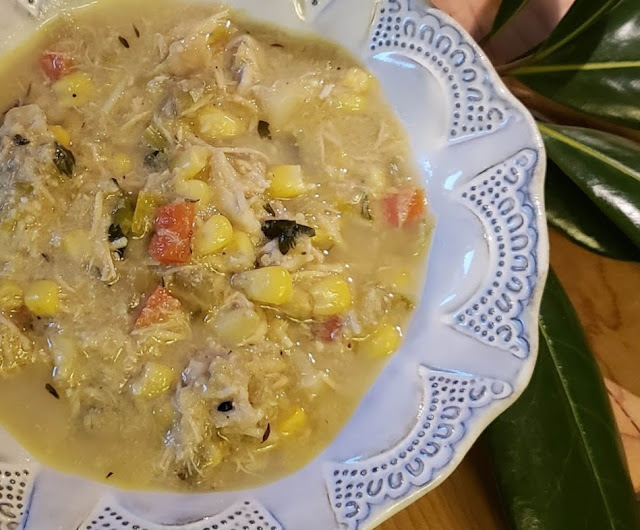 This is one of those quick-to-make recipes. The broth is a low salt store-bought variety, however, you can always make your own! If you can find fresh corn, use it. Save the cobs and let them cook in the broth, then remove them before serving.

The soup contains a pinch of saffron. Did you know there is saffron harvested in Pensylvania Dutch country?
Indeed, saffron is an ancient crop. The fresco above depicts the "Saffron Gatherers," (circa 1600-1500 BCE) and was found at Akrotiri, Greece.

The Pennsylvania Dutch began to cultivate saffron during the 18th century from crocus bulbs they received via Spanish traders who frequented Philadelphia. It turned out that the soil and climate of Pennsylvania were perfect for this crop. Saffron-growing regions became plentiful and came to be called Pennsylvania's "yellow belt." Saffron does cost around $100 per ounce, therefore saffron farming sounds like a lucrative enterprise. However, the crop is difficult to harvest and for that reason, it's no longer widely farmed in Pennsylvania. It's good saffron, though. One of the best varieties anywhere!

Here's what makes this crop difficult to harvest: all aspects of its farming must be done by hand. Back in the day "farming by hand" included all farming but today things have changed. The bulbs which produce saffron must be dug up and replanted each year. When the flowers are ready, they must be harvested by hand. Then, one has to carefully pick each stigma from each flower. One crocus flower contains about three stigmas. Growing saffron is time-consuming and labour intensive; the profit margin doesn't seem worth it to most. Those who still grow saffron view their job as a labour of love: there's something beautiful about cultivating crocus bulbs, waiting till their blooms emerge, and looking at land covered with masses of purple flowers. Then, one by one, gold threads of saffron are extracted from each blossom. It's hard work but there's pleasure to be found in it.

Versions of this soup include the addition of either noodles or rivels. Rivels are very easy to make and resemble a small dumpling. They are a type of noodle that's very popular with the Pennsylvania Dutch. And they're tasty delicious!

To make the rivels:
1 cup flour
2 eggs, beaten
A pinch of salt and a pinch of pepper
some thyme
1 teaspoon of baking powder

Using a fork, mix all the ingredients until just blended. Do not over-mix. Cover and reserve until ready to use.
When it's time, this dough will be added into the soup by rubbing pieces of it between one's hands and letting the resulting crumb-like drops fall into the hot broth.

Directions for the soup:
Posted by Ana at 20:09