KOULOURIA, KOULOURAKIA. WHAT'S IN A NAME?

Is there is a difference between koulouria and koulourakia? The answer is yes, and here are the details:

1.  Koulouria (koulouria is the plural tense and koulouri is the singular tense)

These are somewhat large, bread-like wreaths or rings, smothered in sesame seeds and traditionally served as street food. They are crunchy on the outside, soft on the inside, sesame- doughy tasting, and a great treat to eat. They are carbohydrate-rich and low in fat and make a very satisfying snack. Greeks eat a very light breakfast, so a crunchy late morning snack of koulouri holds them over until the mid-day meal. Koulouria are generally mass produced by specialized bakeries, but there are recipes available for home cooks. (Find my recipe for koulouria here). Bakeries make koulouria at night so that their product can be ready early in the morning for the waiting vendors who will then sell them as a snack food.

Vendors cluster around markets and crossroads. Some have stationary street stands, others are mobile, moving according to demand. Most vendors are sold out by noon: Koulouria go fast. When I was a kid, attending elementary school in Thessaloniki, I used to consider myself lucky if I had the necessary sum of one drachma to buy a koulouri during recess. Sometimes, if our school vendor was in a good mood, she would ask us to cup our palms and she would pour into them the sesame seeds left on the bottom of the trays once the koulouria were sold out. A fist full of roasted sesame seeds can make a kid very happy.

Etymologically speaking, the word koulouri derives from antiquity. In ancient Greece, the word kollyrio* described a small round shaped bread made of barley flour. Later on, during Byzantine times, kollyrio evolved into the word kollykio, and that word evolved into the modern day word koulouri. All three mean the same thing: a small roundish bread. (Hold on. We're not done: In some regions, it’s also known as semiti, a term that derives from the Greek word semigdali (semolina to us). Semigdali or semolina is nothing else but hard or durum wheat, the type of wheat used in bread flour).

Koulouria were a popular street food in Thessaloniki and Constantinople both during the Byzantine and Ottoman periods. Waves of Greek refugees from Constantinople and Asia Minor reintroduced the koulouri to the Greek mainland during the early part of the 20th century. A large number of these refugees settled in and around the city of Thessaloniki which is located in northern Greece. Soon, koulouria made and sold by refugees could be found all over the city, a reason these delicacies, no matter which city they are sold in, are known as "koulouria Thessalonikis." Their popularity continues to this day. 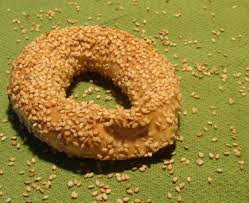 Homemade koulouri, made smaller than the commercial variety. The smaller size is best for home ovens (photo by Sweet Almond Tree).

Here is a personal observation: Look at the picture of koulouria at the top of this paragraph. Do you see the part where the dough has been linked to form a ring? It's clearly visible, it forms an indentation in the koulouri. That is the most delicious part to eat. Since it's been pressed down, it's crunchier, denser, thinner. It has a taste all its own. As a kid, I used to save this "link" for last, and sometimes I would hide it in my pocket to eat as a special treat later on. Eating that little bite was a delight! I, the playground there were two types of kids: those who loved that link and those who didn't. The links were a commodity to be traded or used as ransom in our hide and seek games.  Sometimes you could wind up with two or three in your pocket, and then you would be considered rich!

*The word kollyrio is the etymological root of the word “collyrium,” which is used in the field of ophthalmology. A collyrium was an ancient medicinal preparation: a piece of soft bread was soaked in a remedy and used as an eye compress. Today, a collyrium is a lotion or liquid wash used as a cleanser for the eyes, particularly in diseases of the eye.

I can't not mention that although this is a beloved and celebrated snack, the life of a koulouri vendor (he is referred to as a koulouras) is a difficult one. Selling anything on the street was and is very hard work. As recently as the early 1950s it was usual practice to employ children as vendors. I'd like to share some photographs: 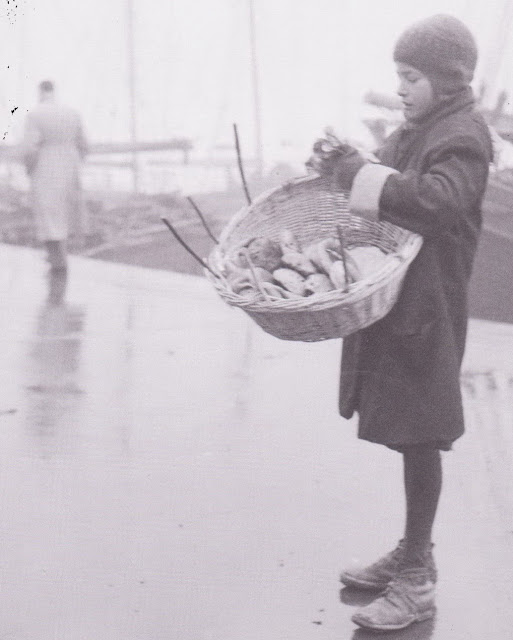 This photograph was not dated but I assume it was taken in the late 1940s. The poverty and misfortune that befell Greece during 1940 - 1950, has descended upon the country once more, this time in the 21st century.

These are small, buttery, desert type cookies. Today they can be eaten at any time, but historically they were made during holidays and times of celebration. Koulourakia can have various shapes such as twists, circles, serpentines, you name it. This depends on the region where they are made and the preference/stamina of the person making them. The basic recipe has flour, some sugar, and lots of butter. The texture is crumbly, crunchy but not hard, and the taste is buttery with hints of the flavourings used. There are several flavourings to choose from: orange, lemon, brandy, ouzo, vanilla, etc. Koulourakia are brushed with egg wash before baking and it's traditional but not necessary to top each one with a few sesame seeds. When koulourakia contain spirits, they are called koulourakia methysmena, which means drunk koulourakia. In some regions of Greece, probably for dietary reasons, spirits are not used for flavouring. Anise can be substituted, to give the hint of the ouzo taste. Ouzo, after all, the famous and omnipresent Greek apéritif, is flavoured with anise. You can find one of my recipes for koulourakia by clicking here. I should mention it was my mother's recipe, and those koulourakia pictured at the top of this post, the ones next to the coffee, were made by both of us: she made the dough, I shaped them. She used to say the recipe was the best one for koulourakia she had ever tried ... given to her by a dear girlfriend.

Note: some of the information on street food and on the etymological origins of the word "koulouri," is taken from the book "Street Foods, World Review of Nutrition and Dietetics, Volume 86" edited by Artemis P. Simopoulos and Ramesh V. Bhat

Four of the photographs are mine, and the rest were taken from Parallaxi, an online magazine.
Posted by Ana at 16:11